The first edition of the Cham Victor holiday sports Jamboree for peace and development, an initiative of journalist and newspaper Publisher, Cham Victor Bama, has wrapped up in style.

The over one month-long tournament which unfolded in Weh village in Menchum, his place of origin ended Sunday August 22.

The closing ceremony was witnessed by local and administrative authorities of the area. A huge crowd of football lovers equally showed up at the ceremony.

The trophy of the first edition of the Cham Victor holiday sports jamboree for peace and development was lifted by Fentoh FC. Fentoh FC defeated Warriors FC to emerge champions. 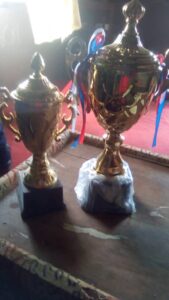 Meanwhile according to the donor, the competition was aimed at keeping youth busy during the long summer holidays as well as promote peace and serve as a unifier.

Cham said the major aspect of social reinsertion was a major facet during the competition following recent social disorders.

Some seven football teams took part at the competition while four did so for the handball games.

The Cash prizes worth over 500,000 was shared amongst the glorious winners. The entire cost of running the competition amounted close to a million franc CFA.

Meanwhile the end of the event, Cham Victor announced that a scholarship program will “follow next this upcoming school year”.

He said the scholarship will involve pupils and students across Fungom subdivision of Menchum division.

The second edition of the Cham Victor holiday sports Jamboree for peace and development will take place next year, the organizer has assured.