The Parliamentarian for Bafut-Tubah (Mezam North) has embarked on a mission to donate aluminum roofing sheets to all affected families in his Constituency.

The first stop was in Bambui, Tubah Sub Division where Hon. Agho Oliver handed over some 2000 aluminum roofing sheets to about 25 affected families.

The gifts are estimated at over FCFA 7 Million.

The donation fulfills the campaign promise of the Member of Parliament.

“During campaigns I promised you that, should you vote for me, I will do all in my powers to rebuild houses destroyed due to the Anglophone crisis” Hon. Agho told the population in Bambui.

The donation of aluminum roofing sheets to the population of Bambui is one of the first Major moves by the MP after he received his attributes on April 17, 2020 at the National Assembly.

Hon. Agho Oliver had then promised to effect his triumphant entry into the constituency in grand style.

The ceremony of Thursday April 23, 2020 saw the presence of the Divisional Officer for Tubah, Alim Garga. 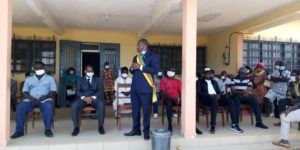 The D.O. who commented the gesture of the young MP enjoined the beneficiary families to make good use of the gifts.

The beneficiary families did not hide their feelings especially at this trying moments with the Coronavirus pandemic.

One of them, Pa Forba Joseph who has lost his home to the crisis thanked the MP for bringing back hope into his life.

The gesture is should be noted falls in line with governments mission to reconstruct and redevelop the troubled Anglophone regions of the country.

A commission to that effect headed by Minister Paul Tasong is at work and they expect Cameroonians of good will to contribute in one way or the other.

After Bambui, the Member of Parliament for Bafut-Tubah Constituency, Hon. Agho Oliver intends to take the gesture to the other villages.