Survivor of the Ngarbuh Massacre in the NW

The hearing of the three soldiers Indicted in the Ngarbuh massacre of the night breaking 14 February 2020 will begin next December 17 at the Yaounde Military Tribunal.

The information is from the spokesperson of the Cameroon military, Conel Cyrille Atonfack.

He was responding to questions from the French Press Agency (AFP), Wednesday November 25, 2020.

The three soldiers are charged with Murder, Destruction of properties, Arson, Killings, Violation of instructions as well as Violence on women.

The opening of the hearing is good news to Ilaria Allegrozzi, International researcher with Human Rights Watch , though she still strongly believes that much could have been done.

“Army spokesman announced opening of the trial on Dec 17 of 3 members of security forces implicated in the Ngarbuh Massacre, it is a good step in the fight against impunity. Authorities should ensure trial is fair + impartial” Ilaria Allegrozzi wrote on her twitter account. 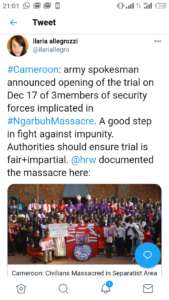 The case is opening in court at a time when families of the victims are still waiting for compensations promised by the Head of State.

But the good news is that a military base has already been set up in the locality to curb the growing rate of violence as instructed by the Head of State.

It was on the night breaking 14 February 2020 that soldiers attacked the locality known as Ngarbuh-Ntumbaw, Ndonga Mantung Division of the North West region.

Following investigations ordered by the President of the Republic, Paul Biya, it was disclosed that 13 civilians including 10 children and 3 women were killed in the attack.

The death toll from the incident varied from entity to entity.

To the United Nations, some 23 civilians lost their lives in the attack amongst them 15 kids, and 2 pregnant women.

Cameroonian soldiers were accused of introducing assailants into the military operation that turned bloody.

Worth noting is the fact that the military had earlier denied the allegations of being responsible for the killings.

The crisis in the restive North West and South West regions of Cameroon that has existed for close to four years has registered over 2000 deaths (Civilians, Soldiers, Armed Fighters) according to UN statistics with more than 600.000 IDPs and refugees.