Newly enrolled students of the ICT University Cameroon will benefit from a donation of free computers and android tablets, authorities of the American-styled University announced Wednesday.

The donation is part of a grant received from the ICT University Foundation based in the United States of America as well as other governmental bodies, the president of the Board of Trustees of the institution, Professor Victor Mbarika disclosed to the media.

He said the offer seeks to ensure that both old and incoming students of the prestigious university own computers and android tablets as part of efforts to boost the Institution’s on and off campus studies.

The ICT University Cameroon, it should be said was amongst the few universities in the country which last year continued lectures unperturbed despite a countrywide shutdown of schools due to the coronavirus pandemic. Students of the University had continued receiving lectures uninterrupted thanks to the availability of laptops and other electronic gadgets placed at the disposal of learners by authorities of the education facility.

Meanwhile the announced donation of free computers and tablets to incoming students of the ICT University for the new academic year, it should be mentioned, comes less than a month after former Nigerian president, His Excellency Olusegun Obasanjo had projected the institution as likely to emerge amongst Africa’s top universities in the near future. 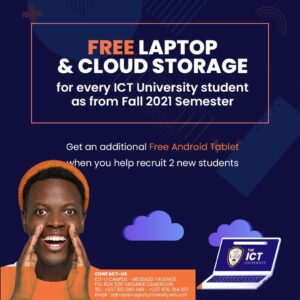 Addressing a huge crowd in Yaounde during the 6th graduation ceremony of the ICT, Professor Obasanjo, who served as Nigeria’s military leader from 1976 to 1979 and later as the country’s democratically elected president from 1999 to 2007, said the ICT University is a reference not only in Africa but beyond.

In his capacity as Guest Speaker at the graduation ceremony, Obasanjo said before long, the ICT University will be in the list of top Ten African Universities.

“I foresee you emerging in the coming months and years, in the new list of valuable players in driving the wheels of this great nation and amongst the architects. If we sustain this your current level of quality, I also foresee this University in no distant future in the list of top ten universities in Africa” said Obasanjo.

Obasanjo had used his discourse titled “The hidden processor for success beyond ICT knowledge and skills” to hail ICT University founder, Professor Victor Mbarika, for making good and wise investments.

“I assure you that this is a responsibility that I take seriously. And as I assured you yesterday, I will not take this responsibility lightly… I will make sure that I’m able to give lectures one or if possible twice a year…”said Obasanjo.

Earlier on, the founder and current president of the Board of Trustees of the ICT University, United States-based renowned Cameroonian Professor, Victor Mbarika, described Chief Professor Olusegun Obasanjo, as a distinguished statesman, intellectual, educator and a peacemaker.

While justifying the choice of Obasanjo as Guest Speaker, Professor Mbarika, said a keen look at the history of Chief Obasanjo can provide one with content for a book on one of Africa’s foremost sons who has shaped the political, economic, social, and cultural landscape of the continent for over five decades.

He said Obasanjo’s political life has inspired modern-day politicians and scholars across Africa in general and Nigeria in particular. Obasanjo’s brand of political ideology, Professor Mbarika continued, is that of peace, unity, and development of the African continent.

It operates a purely US-based curriculum to provide quality ICT and Managerial Human Capacity Development specially targeted for Africa, Latin America, the Caribbean and Asia, the ICT University is a vibrant institution which aims at imposing itself as the premier destination for research, innovation and training of scholars relevant for the context of developing economies.