FECAKARATE Crisis: President, 5 Others Suspended, What Next?

by Louvier Kindo Tombe
in National
0

The Minister of Sports and Physical Education, Prof. Narcisse Mouelle Kombi says the suspension of the scribes is an administrative and precautionary measure, time to dig deep into the alleged sex scandals rocking the Karate Federation.

Time also for all those implicated to place themselves fully at the disposal of the Ethics Commision of the Cameroon National Olympic and Sports Committee.

The decision from the sports boss, with regards to the gravity of the alleged facts, comes exactly three weeks after the launching of an administrative investigation into accusations of moral offenses, misappropriation of funds and sports equipments within the Karate Federation.

On July 17, 2020 Minister Narcisse Mouelle Kombi ordered a probe into the accusations made by some former scribes of the Federation. 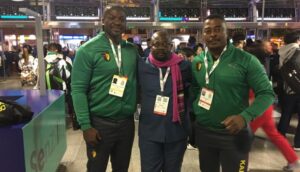 The accusations were contained in a 19 page document that circulated on social media dub;

“Report on sexual violence within the Karate Federation in Cameroon”.

Accusing fingers were pointing at the president of the Federation, Wakam Emmanuel for being the brain behind the moral offenses.

Besides the document from former scribes of the Federation, some of the victims of the alleged sex scandals equally spoke out on social media throwing accusations on the president, Wakam Emmanuel.

Wakam Emmanuel, in an outing had denied the allegations but indicated that one female athlete who was injured was receiving personal massage from him inside his room during one of their international competitions, nothing to do with a sex scandal.

According to a notice from Minister Narcisse Mouelle Kombi, at the end of the proceedings at the Cameroon National Olympic and Sports Committee, a final administrative decision will subsequently be taken.

The Minister in his notice calls on all sportspersons, technical and administrative officials of all sports movements to scrupulously respect ethics and sports values so that Cameroonian sports should continue to significantly contribute to the consolidation of the brand image of the country.