by Louvier Kindo Tombe
in News
3

Scribes of Vision 4 television say the former director is said to have abused the confidence placed on him by top management.

Parfait Ayissi, the Director of Vision 4 television, has revealed that high level betrayal is key of the accusations contained in the complaint tabled by the CEO of Anecdote Media Group, Jean Pierre Amougou Belinga.

The editor in chief of the English desk, Roland Akong Wuwih in a recent TV outing, added that the arrest and detention followed soon after the CEO got information of a secret deal signed between Ernest Obama and an opposition presidential hopeful in Central African Republic. He is said to have positioned himself as campaign manager of the opposition candidate.

Ernest Obama is employee of Mr Jean Pierre Amougou Belinga, whose business partner is incumbent president of CAR, Faustin Archange Touadéra, and for him to side with the rival of the president is seen as total betrayal.

Another factor of betrayal outlined is the fact that Ernest Obama secretly works with Anecdote Newspaper, and created two newspapers which focus on tarnishing the image of the CEO of Anecdote Media Group, his boss.

Besides betrayals, there are equally accusations of embezzlement of company funds.

The former director is said to have siphoned millions of FCFA in the following deals;

– Purchase of an outdoor broadcasting mobile van,
– Setting up of the Douala office of Vision 4
– Creation of a private account for Vision 4 among others.

Days after the arrest of Ernest Obama, public opinion, social media and other media organs have been reporting diversely on the issue.

Many question the humiliation given to the former director on the day of his arrest, where close to a dozen gendarme and police officers without an arrest warrant forcefully took him off.

Human rights activists and political leaders equally decried the fact that the rights of the Journalist were violated.

The information and misinformation on the Obama affair pushed Vision 4 television to organise special programs Monday June 22 in view of throwing more light on the situation. 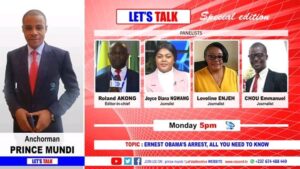 Most, if not all those who participated in the programs threw the blame on Ernest Obama for betraying the trust of his boss, and for being ungrateful to the man who took him from grass to grace.

While saluting the magnanimity of Jean Pierre Amougou Belinga, these journalists revealed that, the CEO of Anecdote Media Group is willing to forgive Ernest Obama on condition that he accepts his errors and ask for forgiveness.