At the 30th anniversary celebration of the Cameroon Association of English Speaking Journalists (CAMASEJ), members resolved to work as a team in taking the association to higher heights. The celebration was an occasion to revisit the path covered so far and map out strategies for more achievements.

By Louvier Kindo Tombe in Yaounde

Before November 25, 2022, English Speaking Journalists in Cameroon had never attended a non elective annual general meeting (AGM) of their association.

“What has been happening is that we come together and elect leaders and wait again for two or four years to elect new leaders”, Viban Jude said in his opening speech during the first ever organised CAMASEJ non elective annual general meeting (AGM).

The Yaounde AGM brought together CAMASEJ members from all the six chapters that make up the association.

“It was an innovation from the current national executive to have organised the first ever non elective annual general meeting of CAMASEJ”, Says Samson Tabufor, senior reporter and publisher of the spokesman newspaper.

The AGM held on the theme “CAMASEJ @30, a new breeze”. The new breeze according to the national president of CAMASEJ, Viban Jude is to work towards making the voice of the association more powerful than the voice of its members.

“It is not about the people we put there, but about what we are doing”, Viban said. To him, “nobody is bigger than CAMASEJ.”

CAMASEJ patron, Ntumfor Barrister Nico Halle, who gave a key note address during the AGM said “there can be no meaningful development without the press playing it’s fundamental role.”

The Viban-led national executive have been doing more to raise the standards of the association and give the practice of journalism the grandeur it deserves. 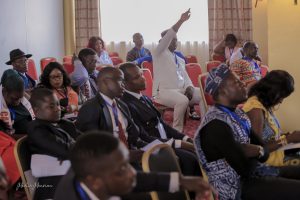 Some achievements in this light can be cited. The recent being the Introduction of the ‘Francis Wache Young Journalist Award’.

“We need to provide pathfinding to our junior colleagues”, Viban Jude said.

The pioneer edition of the Francis Wache Young Journalist Award which aims at honouring the works of senior journalist and publisher of ‘The Post’ newspaper was won by multimedia freelance journalist, Nalova Akua.

“I feel really honoured that the judges found me worthy enough to win the award which honours a journalism icon I have heard and read so much about, but unfortunately didn’t meet personally”, Nalova Akua told News Upfront.

“The award is also a call for seriousness and meticulousness in all my journalism endeavors”, he added. 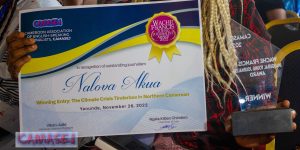 Seriousness and meticulousness form part of the new breeze CAMASEJ needs at this moment.

Other key personalities were honoured during the AGM as well. Like the lifetime achievement award presented to Gideon Taka, In recognition of his lifetime compassionate and dedicated services to the training of journalism and mass communication professionals.

“If we split CAMASEJ into peices, we are splitting ourselves, if we give the opportunity to politicians and others to split and rule us, we will be the ones to cry”, says Viban Jude during the November 2022 AGM.

Just like any other association, CAMASEJ has its own flaws. The different past presidents of the association have contributed to bring it to where it is now, and some senior colleagues believe that much need to be done.

“CAMASEJ is yet to fully emerge as umbrella association over all English speaking journalists in the country”, says Kini Nsom, senior journalist and editorialist at The Post newspaper.

It is true that there is freedom of associations in the country but like many believe unity is strength. In this light, Kini Nsom thinks that the executive of CAMASEJ need to wake up.

“The leaders of CAMASEJ are supposed to be shopping for members on a daily basis, convincing them to see the need to belong to the association”, he said.

The idea of the non elective AGM was easily bought by many who saw it as a perfect avenue to brainstorm on and fix salient issues of the association given that fresh election at the national level is around the corner.

“We are here to fix, it is a good idea, though the turn out was not the best due to communication issues which we pray should be dealt with properly next time”, says Maureen Ndih, CAMASEJ Douala Chapter President.

Members at the Center of CAMASEJ

The Francis Wache Young Journalist Award is a clear indication that CAMASEJ has its members at heart. But that is not all.

“We can pride ourselves as the only association that organizes training seminars for its members with reporting grants”, Viban Jude said.

A perfect example is the CAMASEJ workshop of Nov. 4-6 2021 in Kribi, which held on the theme: Factoring Gender, Human Rights In Conflict Reporting in the English-speaking Regions of Cameroon. The workshop was supported and funded by the Government of Canada.

“It was a good experience in Kribi, i actually pitched my story after the workshop and received a grant to do the story “, one of the participants of the workshop revealed to News Upfront.

Solidarity amongst CAMASEJ members can not be over emphasized.

“Being a member of CAMASEJ is a privilege for me because the association itself is made up of media men and women of timber and calibre who are out to uphold ethical journalism”, Nalova Akua said, adding that “with CAMASEJ, I feel more confident and protected practicing journalism.”

Many are those who see things same as Nalova Akua.

The idea of the new breeze in CAMASEJ was equally to place journalists at the centre of the practice of journalism, and for this to be effective there is need for paradigm shift.

“Njangi and solidarity funds, regular professional talks during monthly meetings, why not create monthly event in which experts could be invited to brief journalists on pertinent issues”, Kini Nsom encourages all chapters to lay emphasis on these. 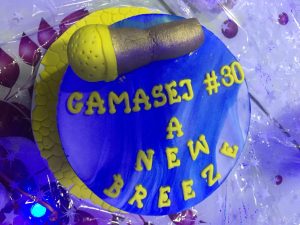 The crux of the AGM was to rebrand the Cameroon Association of English Speaking Journalists (CAMASEJ). Reviewing CAMASEJ’s constitution was focus.

“It was in our interest to make entry into CAMASEJ very difficult and exit easy”, Viban Jude said at the AGM.

The statement from the National President was backed by the fact that charlatans have embraced the profession dragging the name of the association through the mud.

“We of the Bamenda Chapter have created partnerships with academic institutions and we encourage every practicing journalist to get the required certificates for the profession”, says Ndi Tsembom Elvis, out-going CAMASEJ Bamenda Chapter president.

CAMASEJ has existed for 30 years without a structure of its own. The vision of the present executive is also geared towards that.

“What we are looking forward to is for us to have a physical office for the first time in 30 years”, says the national president Viban Jude.

“That is very possible because the funds are available”.

However, it is not all about funds. For CAMASEJ to be respected by partners and others, the association first of all needs to upgrade itself. Fruitful collaboration with partners and the government will play a win win deal.

Journalists need information, but there is nothing that compels authorities to give our requested information. Here, CAMASEJ sees another big door to open.

“It is important we have the information act which will compel authorities to give out requested information”, Viban said.

He added that “it is in the interest of the government to empower the media,” because they may need the services of the media at one point.

Financial transparency in the past has always been an issue in the management of CAMASEJ activities. CAMASEJ has always wanted to multiply avenues to support its members financially. The Viban-led national executive took interest in these issues and came up with the CAMASEJ Fund initiative.

The Fund, seen as the first of its kind in CAMASEJ, comes at a time when journalism in the country is increasingly being constrained by financial and political factors, with many journalists having been persecuted because of their job.

“All past presidents have contributed to the growth of the association, Simon Lyonga for instance is the one who decided that chapters should rather channel but 30% of their dues to the national and not 70% as it used to be before ” says Viban Jude.

“Late Paul Kemayang, it should be noted is the one who decide to spread CAMASEJ into chapters”, Jude continued, and this for more visibility and empowerment of the association.

CAMASEJ it should be noted will hold its Elective General Assembly in 2023.