The International NGO says the Iron Ore Mining Project to be exploited by Chinese company (SINOSTEEL) through its subsidiary Sinosteel Cam SA is of great importance to the government of Cameroon, but it's implementation risks affecting the rights of inhabitants in the various affected communities.

When officials from Transparency International (TI) Cameroon visited Ebodje, a locality in Campo Sub Division, Ocean Division of the South region of Cameroon, their intention was to investigate related challenges surrounding acces to land.

It was within the framework of activities of the second phase of their project dub “Land and Corruption in Africa Programme”.

On the field, Transparency International became interested in the Iron Ore Mining Project that is being planted in the village.

“In Ebodje we could easily establish a relationship between iron mining, land grabbing, protection of community rights and rural corruption”, a statement from the NGO reads.

The discovery pushed the organization to carry out an in-depth investigation. Transparency International thus multiplied field visits to Ebodje and it’s environs during which they talked with traditional authorities, local associations members and inhabitants in general.

Initially, their worries (Ebodje community) were lack of information concerning the project and fear of being displaced from their homes.

The fact finding mission left Transparency International with unanswered questions concerning the project and the respect of the rights of the population, which they channeled to the competent authorities in Cameroon (Ministries and administrations concerned).

“…Unfortunately, these questions that we addressed to the Ministry of State Property, Surveys and Land Tenure (MINDCAF), and the Ministry of Mines Industry and Technological Development (MINMITD) remain unanswered on their part…”, the statement from TI indicates.

Officials of Transparency International says everything suggests that the powers that be are in a move of retaining vital information about the project given that allegations of bribery and corruption by the Chinese company are being echoed.

According to Transparency International’s Global Corruption Barometer, the land sector exhibits one of the highest bribery rates among public services, affecting one in five people globally.

As a civil society organization, the objective of Transparency International in the said mining project is to guarantee the respect of the rights of communities involved by both the government of Cameroon and the exploitation company (Sinosteel Cam SA).

From November 24 to 26, 2022, Transparency International led a team of reporters to one of the communities to be highly impacted by the project (Ebodje).

Just because of the fact that the mining convention was signed and the exploitation permit issued without proper information given to the community, many people were confused and worried about their faith.

“Our greatest fear was that we would be driven away from our homes”, says a native of Ebodje.

Following constant communication from Transparency International, the Senior Divisional Officer (SDO), of the Ocean Division, Nouhou Bello, has finally launched the census of persons affected by the project and evaluation of materials to be damaged.

“We think that something is fishy somewhere for the convention to be signed before the census operations”, laments another native of the village.

The census commission headed by the SDO will have as mission to sensitize the population in all the villages concerned about the project and it’s benefits to their respective communities.

The population of Ebodje however are of the opinion that their rights would not be respected in the implementation of the project.

“The SDO says the government will only compensate those with a valid land title within the zone reserved for the project, whereas most of my people don’t have titles for their lands but have been cultivating the lands for long”, says Chief Ndjokou Djongo of Ebodje.

However, decree no. 2003/418 PM of February 25, 2003 stipulates that owner victim of expropriation for cause of public utility and destruction of cultivated trees and/or food crops, benefits from a compensation …. and this concerns ‘titled and untitled’ lands when occupied by trees/crops.

Besides the worry of who to receive compensation, the Chief of Ebodje regrets the fact that people are brandishing land titles from his community where as he never assisted in their establishment as per the law.

“I can not confirm any such land title”, he told reporters who accompanied Transparency International to his village.

Chief Ndjokou Djongo added that “the project will generate immense environmental hazards in this community and we don’t know what measures they have put in place to mitigate the risk.”

“The Kribi Deep Seaport project has polluted our water, the Camvert project has equally rendered farmlands arid since they all use and discharge toxic chemicals. With the mining project, we fear the situation would get even worse in this village “, a fisherman recounts.

Fishing is the main activity in Ebodje.

“Most farmers have abandoned farming activities since wild animals from nearby forests constantly invade and destroy crops in the village”, says a former farmer now fisherman in Ebodje.

As everyone awaits the implementation of the project, their wish is for the powers that be to do all to mitigate the earmarked environmental hazards.

Transparency International is constantly working with the community to see that dream come true.

About The Land and Corruption in Africa Programme of Transparency International

The Land and Corruption in Africa Programme of Transparency International was successfully rolled out from 2014 to 2019. The second phase of the project (2021-2025) is ongoing and seeks to address land corruption risks by;

– Sharing information on how land corruption manifests and what its effects are,
– Ensuring that land corruption and actions to fight it are put on the agendas of governments and international bodies like the African Union,

-Raising the importance of combating land corruption in the global land governance debate,

-Educating citizens about their land rights and how to defend them,

-Ensuring intergovernmental organisations, governments and business have procedures in place to sanction offenders and bring about justice for affected citizens,

-Pushing for solutions to land corruption that are responsive to the needs of women, young people and other marginalised citizens.

The Mining Project in Figures 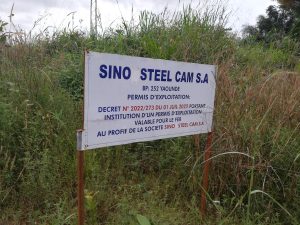 According to the Minister of Mines Industry and Technological Development (MINMITD), Gabriel Dodo Ndoke, the current mining project is a win-win convention hat the state of Cameroon has signed and which will contribute significantly to the development of the economy of the country.

The project is expected to generate at least 600 direct jobs and 1.000 indirect jobs.

Under the terms of the deal between the government and Sinosteel Cam SA, The exploitation company will mine 10 million tons of iron ore, with 33% iron content annually.

The contract according to sources give Sinosteel Cam SA, a 50 – year claim on the ‘Lobe Mine’ which is said to hold about 632.0 million metric tons of high-grade iron ore.

The convention allows for 15% of the iron ore to supplied to the local market, but Cameroon could authorise Sinosteel Cam SA to export it if local demand is weak.

The project would be 30% self funded, with 70% of the financing coming from bank loans.

The minister of Mines Industry and Technological Development indicates that the specification documents hold Sinosteel Cam SA to build schools , hospitals, roads, and a 20-kilomater-long pipeline move the ore from Lobe to the Port in Kribi, a coastal city in the South region of Cameroon. Sinosteel Cam SA also agrees to enrich the iron ore from 33% to 60%, which will drastically improve its market value.

The deadline for the project to go operational is yet to be announced by Sinosteel Cam SA, but under Cameroon’s Mining Code, the company must begin the project within five (5) years from the the day the mining permit is granted.

COP27: Cries From Local Communities in Cameroon as Delegates Set to Brainstorm in Egypt