The promoter of the up coming arts and culture festival in Yaounde dub ‘Ensemble Festival’, Tambong D Kum, says his objective is to provide a platform that will promote cultural diversity and local production in the country.

He was speaking Wednesday December 1, 2021 in Yaounde as he presented the concept of the festival to the press.

“We are offering them a platform where they can digitize what ever they are doing, be it their arts or whatever.” Tambong D. Kum, told journalists during the press conference.

Focus of the conference was on the presentation of the various activities of the festival which is in its second edition this year.

Holding on the theme, “digital future for our arts, our culture, our local production“, the following activities shall mark the festival; 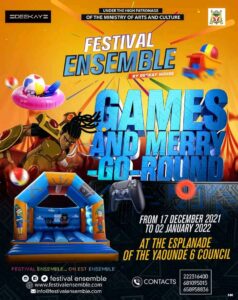 – A cultural carnival,
– An exhibition fair,
– Musical displays,
– Quizz, and games for children, all with the aim of promoting living together.

The promoter of the festival announced interesting financial assistance to talented artist during the festival as a major innovation this year. Some artists will see their complete albums produced.

Just like during the first edition, the festival will take place at the explanade of the Yaounde IV Council. The presence of the Deputy Mayor of the municipality, Virginie Ngah, during the press conference in Yoaunde was a strong indictation of the council’s support to the initiative.

“Our council area habours the highest number of IDPs of the Anglophone crisis in Yaounde, the end of year period is usually a loose period for students who are often left on their own and at the mercy of drugs and other societal ills. The coming of this festival is good news to the council as it will not only occupy the youths of Yaounde IV, but will give them an opportunity to sell their talents to the rest of the world.” Says Virginie Ngah.

Coming at the time when the Covid 19 pandemic is still spreading across the country, the organizers have taken firm measures for the respect of all the barrier measures put in place by the government of Cameroon. They shall also be special screening and vaccination campaigns through out the festival.

Security measures have also been taken to ensure the safety of the over 5000 participants expected daily at the festival ground. 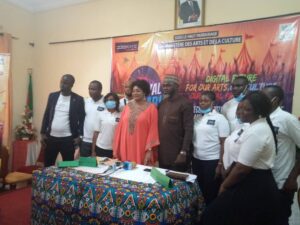 Worth noting is the fact that the festival is organized by Deekay House Entertainment. It will go a long way to boost economic activities in the country.