The Member of Parliament for Bafut – Tubah Constituency in Mezam Division of the North West region of Cameroon has been described as the ‘Bambili Hunter’ following his unmatched contributions to the success of the Bambili Water Project fund raising ceremony.

He was named by the Fon of Bambili, HRH Afungchui III, on Saturday December 3rd 2021 during the event that took place at the explanade of the Fon’s palace in Bambili.

Sons and daughters of Bambili including friends of the village gathered under the banner of the Mbeligi Cultural and Development Association (MBECUDA) for the event and the sum of about 77 Million FCFA was raised under the supervision of the youngest MP in the present legislature, Hon. Agho Oliver.

As a pro active grassroot leader, the MP mobilized huge financial resources towards the realization of the project.

Hon. Agho Oliver on his part besides the money ‘hunted’ personally offered FCFA 300.000, a contribution which made the Fon and the Bambili population highlighted.

The Bambili Water Project it should be noted is estimated to cost FCFA 600 millions. 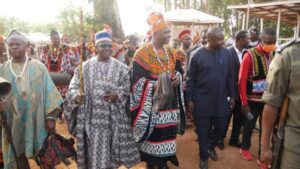 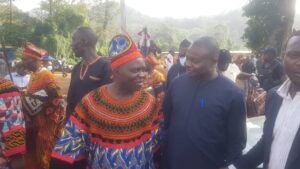 During the fund raising ceremony, the MP officially presented the new Divisional Officer for Tubah to his people, and he did not hesitate to assist the fund water project financially.

According to the organizers of the fundraiser, it was more of an opportunity to celebrate the return of peace and normalcy in Bambili thanks to the collaboration of the population.

A collaboration that Hon. Agho Oliver calls on other communities within his constituency to emulate and benefit from the numerous development projects available.