Amid beliefs that the tree is spiritual, and cannot be replanted by humans, women of Malawi’s two districts are courageous to restore the Mulanje Cedar tree which is found only in this country and on this mountain 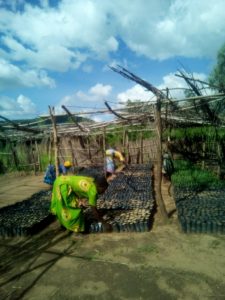 It is the rainy season in Malawi. Most women are busy plucking abundant local leafy vegetables to preserve for use during the dry season.

But women surrounding Mulanje Mountain residing in Mulanje and Phalombe, districts have chosen otherwise, they are planting Cedar trees. The women are determined to take a minimum of two hours climbing up Mulanje Mountain, carrying baskets containing 35 Cedar tree seedling tubes on their heads. This is a break from the culture and tendency that only male tourist guides earn a living from this mountain, Malawi’s biggest.

The women confidently emphasize that they do not want their children to witness the extinction of Mulanje Cedar like it has happened with this generation. Cedar is Malawi’s national tree found only on this mountain. It is a high-value timber tree that is durable, termite-proof and mainly used for construction and woodcarving. The mountain currently does not have any fully grown trees following massive, illegal logging that happened a few years ago.

“The membership was open to men as well but they weren’t interested. They prefer making easy cash through tour guide jobs for tourists visiting the mountain,” she tells.

Before the cedar initiative, Napanga recalls, the group members were part of a village forestry committee but never made extra money and lacked the skill to multiply tree seedlings.

“Forests and other nature-based solutions can lift one billion people out of poverty and create an additional 80 million green jobs,” reads the factsheet in part, adding, restoring 300 million of degraded forest globally is a business opportunity estimated at $175 billion annually.

“When we share the profits, we are able to buy our basic needs, pay school fees for our children among many other benefits. Our group also has a Village Savings and Loans component. We keep some of our profits and share at the end of the year,” Napanga elaborates.

The women’s determination is in line with pillar eight of the African Green Stimulus Program (AGSP) which aims at supporting the sustainable management of forests.

Mulanje Mountain Ecological Baseline Survey which the Forest Research Institute of Malawi (Frim) conducted between January and February 2017 indicates that only seven mature Cedar trees were available on the mountain, down from 63,000 in the year 2013/2014. This meant a loss of livelihoods for the communities surrounding the mountain and other environmental benefits that the trees provided.

The District Forestry Office(DFO) and Non-Governmental Organisations (NGOs) tried to replant the treasure tree and other companion species but this did not yield desirable results as the communities were not fully involved. There was no motivation or direct benefits.

MMCT in collaboration with We Forest Malawi and the DFO redeveloped the Cedar restoration initiative in the year 2018 but this time around involving surrounding communities and traditional leaders.

MMCT Programmes, Environmental Education and Communications Officer, Kondwani Chamwala says there was a disconnection between the communities, NGOs and forestry office which made it hard for law enforcers to protect Cedar from being exploited.

“Since the 2018/19 tree growing season, we have been involving communities. Women are at the fore of this initiative. We have eight Cedar tree nurseries around the mountain and all of them are headed by women. This project has a deliberate clause that 60 per cent of the members should be women. We have witnessed many groups achieving more than this target,” he observes, “This has been beyond restoration…it has assisted in improving the community livelihood.”

“Apart from logging, a forest fire is another major threat for the Cedar. Communities have also been trained in fire break making, especially where the Cedar trees were planted. Communities are more than willing to take part in the Cedar restoration because they know how valuable it is,” he says.

Mr Chamwala adds: “It’s encouraging to note that women have a special interest and are leading this initiative. They are dedicated and hard-working.”

About 920,000 cedar trees have been planted on Mulanje Mountain between the 2018 and 2021 tree growing seasons.

Mr Chamwala discloses that 120 households will also benefit from the Cedar seedlings which will be planted like hedgerows. Oil will be extracted from the hedges and will be used for income generation as a way of motivating the communities to have immediate benefits for replanting the Cedar tree. This is also women championed initiative.

DFO for Mulanje, Erick Mbingwani is impressed with the women’s passion towards Cedar restoration on Mulanje Mountain.

He remembers that Cedar damage began in the year 2010, attributing the loss to a conflict between communities and his office, “We had security lapses (on the mountain) at that particular time which led to a lot of bush fires. This gave the loggers an opportunity to use the damaged Cedar trees.”

Mr Mbingwani acknowledges, “Women are doing a commendable job in planting and caring for the newly planted Cedar trees. We always encourage women’s representation in environmental conversation and its working wonders.”

The DFO tells that the restoration of Mulanje Cedar is a continuous and sustainable process since they are working with communities and traditional leaders in order to continue with the initiative in case the NGO partners are no longer there to support them, “We want the next generation to have a good environment and appreciate nature.”

All players comprising the community, MMCT and DFO indicate that the initiative did not meet its target due to seedling failure at the infancy stage.

“We initially had ten nursery groups but we suspended the two groups because it had high numbers of seedling failures, a thing which we attributed to poor management. We are maintaining the eight groupings now,” Mr Chamwala says.

Ms Napanga, reveals that her group planted 7,200 trees at the nursery but only 4,000 Cedar tree seedlings survived.

“We suspect some members may be careless so this time around we have demarcated work stations within the nursery where every member will be responsible for a number of tree seedlings to care for. In so doing we will be in a position to spot who is lacking and needs support,” she says.

Traditional Authority Chikumbu whose jurisdiction covers parts of Mulanje says she is pleased that women are at the helm of restoring Cedar since it is a national treasure.

“The restoration of Cedar has provided employment for women who otherwise would have been idle and without a source of income. This initiative has empowered them a lot. Even female traditional leaders are encouraging each other to spearhead this initiative and it is happening as such,” she proudly says.

TA Chikumbu pledges to support all environmental conservation initiatives that are putting women at the fore in order to ensure equal representation and their economic empowerment, “I’m glad that there is the full involvement of local communities and traditional leaders. This encourages ownership thereby lessening chances of exploitation.”

We Forest, an international organisation currently working in 12 countries across three continents is supplementing efforts to restore Mulanje Cedar on Mulanje Mountain and to protect water and biodiversity.

We Forest Programs Manager, Clemmie Borgstein says her organization also deals with monitoring surviving plants, checking on which other species could become companion species and research.

“We initiated our project in the year 2019 aiming at planting 120,000 trees per year of which 50 per cent is Cedar and 50 per cent companion species,” she tells.

MMCT, We Forest, traditional leaders and District Forestry Office have managed to elevate women to lead in the restoration of Cedar on Mulanje Mountain. In order to achieve the United Nations Sustainable Development Goals on the environment, there is a need for the Malawi Government to increase funding towards environmental sustainability and have the political will to strengthen community involvement so that the Makolera and other Cedar nurseries gesture should spread over to other environmental restoration initiatives.

This article is part of AWiM/UNEP Africa Environment Journalism Programme.

‘We were treated like slaves’: Agonies of Cameroon’s domestic workers in the Middle East

'We were treated like slaves': Agonies of Cameroon’s domestic workers in the Middle East