The decision from the government of the Republic of Cameroon has raised eyebrows among some experts who were commisioned to work towards the implementation of the health coverage.

On August 27, 2020 the Minister of Public Health, Dr. Manaouda Malachie announced that he has signed a partnership agreement with some Korean counterparts for the implementation of the Universal Health Coverage.

According to a tweet from the Minister of Public Health, the agreement was signed in the presence of the Prime Minister and Head of Government, Joseph Dion Ngute. 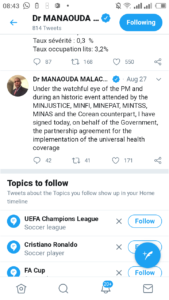 The announcement from the Minister has been received with mixed feelings by some experts who were working on the same project.

One of them Isaac Bissala, president of the General Union of Cameroon Workers is bitter with the decision.

“The government of Cameroon created a working group to elaborate on the implementation of the Universal Health Coverage and we have been on the project for years now, how come the same government is attributing the contract to a foreign company without even consulting us” he told News Upfront reporters.

To Isaac Bissala, the government is not clear and at the working group, they will take neccesary measures to dig deep into the contract.

“I shall in the days ahead write to the Prime Minister for clarifications” Isaac Bissala continued.

The working group, it should be noted have been on the project for close to three (3) years and their report was almost ready.

They had identified that the implementation of the Universal Health Coverage will cost some 1.300 billion FCFA, with over 185 interventions and 101 sub interventions.

The working group had equally envisaged the collection of 286 billion FCFA before 2021.

The Korean Enterprise, (SUCAM), fruits of a joint venture, will coordinate the health coverage for seventeen (17) years according to the partnership.