One of those presented as victims of the Mexico boat accident is Ngu Emmanuel Cheo, a biology teacher and ex student of CCAST Bambili in the North West region of Cameroon. The news is still a shock to his family.

News Upfront caught up with a family member to confirm the news of his death.

Below is a resume of the discussion;

(N UF): Do you recognize the name circulating on social media as victim of the Mexico boat accident?

(Family source): Yes, That is my wife’s elder brother. 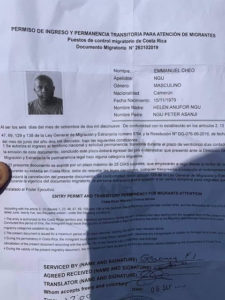 (N UF): did he actually plan to use that corridor in his trip?

(Family source): No, he was forced to take the trip because of the pressure as a result of the Anglophone crisis in the NW/SW regions. He was quarter head at Mile 1 Up-Station, Bamenda, he had received many treats from both government security forces and separatist fighters (AmbaBoys) among other challenges. He had earlier made known his intentions to run for safety with travelling abroad among though the right opportunity did not show up so soon.

(N UF): didn’t you try to prevent him from embarking in such a journey?

(Family source): of course we did, After many hesitations, he finally decided to embark on that Ecuador/Mexico Trip to the USA.

(N UF): were you in communication with him along the way?

(Family source): not really but we had information from time to time. They had gone through all the most dangerous parts of that trip  were approaching the USA border.

On that last lap of their journey, so unexpectedly, we don’t know how they decided to rather use a boat from Southern Mexico to get to the USA border.

(N UF): besides the document carrying the name of your relative, there is a picture circulating on social media, is he the one on the picture?

(Family source): Although media sites are using his identification document to confirm that he is the dead person, the pictures being displayed for the confirmed dead person are not his pictures, even though others are now reporting about 3 dead.

That’s all I can tell you all for now

It should be noted that, Ngu Emmanuel Cheo is a native of Mendankwe in the North West region of Cameroon.

His little children he left behind days before news of the tragedy had written a letter where in the were asking the day their father would return.

Little did they know what he was on a journey of no return.

And now, from all Indications, he shall return no more.

The other side of the training for Cameroonian journalists on media, peace and elections

The other side of the training for Cameroonian journalists on media, peace and elections