With its rich historical treasures, Egypt has more to offer visitors, giving them a chance to taste culture and adventure at the same time.

Tourism in Egypt is based on the cultural heritage of the Nile Valley. During the past two decades, the diverse natural heritage (nature reserves) attracted more tourists to Egypt. Accordingly, the government has adopted an extensive plan to develop tourism, especially in the governorates of the Red Sea and South Sinai, which represent more than half of the tourism development in Egypt and immediate areas on the Northern Coast and the Western Desert.

The vision of the Ministry of Tourism states that by 2020 the number of tourists will reach 30 million, generating up to $30 billion annually. The vision of the Ministry of Environment also depends on increasing visitors to nature reserves, with revenues reaching $10 billion annually, with the need to diversify the tourism product and focus on eco-tourism. There are also many other industries in agriculture, including various food industries, pharmaceutical industries, and aromatic plants, which are famous for eco-tourism areas such as Fayoum Governorate, Siwa, and Bahariya Oasis. This aligns with one of the critical objectives of the African Green Stimulus Programme, which is to provide a rapid response in support of vital economic sectors hardest hit by the pandemic, such as eco-tourism and the biodiversity economy.

Dr Yusriya Hamed, project manager of the Egyptian-Italian Environmental Cooperation Programme, explained that the Nazla area is famous for its pottery industry, and the Ajamiyyin area is known for exploiting palm leaves.

She pointed out that the development of these areas includes the establishment of visitor centres to introduce these crafts and their cultural history. Promoting tourism to participate in the implementation of handicraft activities and transfer experiences to visitors, is not widespread in Egypt, despite the richness of its governorates with many heritage crafts that can promote them globally and locally.

Manal Al-Esawy, head of the Badr Association for Environmental Protection, says that eco-tourism came to meet two needs: the consumer’s need for natural tourist places that were not damaged by public tourism, and the need to develop a conservative environmental mentality that has its philosophy and principles.

This type of tourism is accompanied by a greater sense of responsibility towards nature, culture, and local values.

Eco-tourism carries the same risks as any other form of tourism and poses the problem of growth and protection.

Regarding the need for eco-tourism, Mr Manal explains that it needs a lot of publicity from the state to attract tourists worldwide.

He adds that its growth raises questions about the impact of its geographical spread and its access to places that tourism has not yet reached, compared to the limits of the geographical influence of tourism on centralised masses. “And suppose this eco-tourism remains confined to the elite of loyal nature lovers. In that case, the question will become its feasibility in serving the sustainable development of the tourism sector in general.”

“Nature can be saved by selling it. Although the relationship between tourism and protection in those areas is complex, even contradictory at times, tourism is an essential element that was always taken into account at the beginning of its establishment and management in a way that preserves it for future visitors” said Mr Manal.

In the same context, Ali Abu Sneh, Head of the Environmental Affairs Agency at the Ministry of Environment, says that there is no single definition of eco-tourism. Some equate it with natural tourism or tourism that is keen on the environment, and while some see that all tourism is environmental in some way, others question the existence of eco-tourism in the first place. The definition presented by the Ecotourism Association in 1992 says: “Eco-tourism is responsible travel to natural areas that preserve the environment and support the interests of the local people.”

Abu Sneh says that eco-tourism actively contributes to preserving nature, culture, and heritage. Local communities also participate in its planning and development and contribute to its well-being. It also explains the natural and cultural heritage of the area in question. It best serves independent tourists and organised excursions.

Concerning the role of women and their participation in eco-tourism, Dr Issam Shuwaikh, an environmental expert, says that women have a great role in eco-tourism and depend on their participation in handicrafts and raw materials that come from nature. These industries depend on the hand or using simple tools, which is one of the main sectors of traditional craftsmanship.

“Egypt has known handicrafts since the era of the Pharaohs when the Egyptians were distinguished from others in the manufacture of handicrafts in terms of the use of natural products like cotton, wool, wood, and silk,” said Dr Shuwaikh.

“Therefore, Egyptian handicrafts are famous for their diversity, richness, and uniqueness in terms of mastering the workmanship and taking into account the details. Women contribute greatly to tourism by selling these handicrafts in places like Fowa and Al-Joura in Arish, Marsa Alam, Abu Simbel, and Siwa,” she explained. 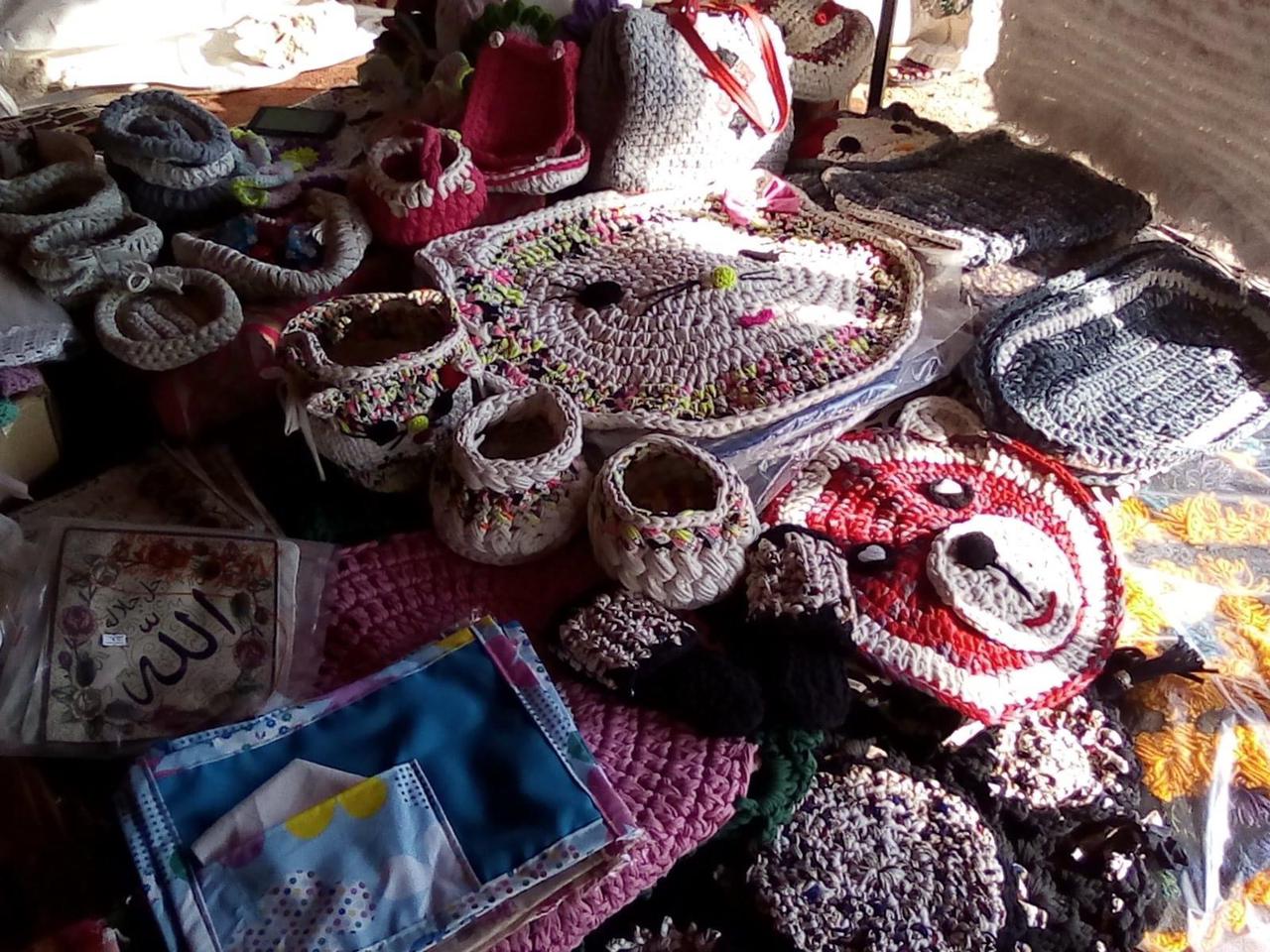 Handcraft made by women. Photo/Randa Fathi”And the embroidery industry in Damietta, Siwa, and Bir al-Abed in Arish and St. Catherine, the textile industry in the Akhmim areas of Sohag and Naqada in Luxor, and Saqia Abu Shara specialised in the manufacture of hand-made carpets, the leather industry in Old Cairo, Alexandria, Halayeb and Shalateen, and the manufacture of jewellery in Nasr Nuba Gathering, Halayeb and Shalateen Marsa Al.”

Dr Shuwaikh adds that handicrafts have economic advantages since they make use of local raw materials, especially available in rural areas, and have the possibility of creating greater job opportunities by allocating fewer resources compared to the requirements of other industries and their ability to absorb and operate large numbers of labour forces with low educational qualifications.

Dr Shuwaikh, who also serves as the president of the organisation “Your Hand is Your Source of Livelihood,” explains that women, as mothers and housewives, can practice the craft whenever and wherever they want, including at home. It is also characterised by the low cost of training due to its dependence on the method of on-the-job training and its use in most of the technology.

Handcraft is uncomplicated and straightforward, and it’s flexible in spreading in various regions, especially where raw materials are available. This leads to achieving balanced development between rural and urban areas and reducing the phenomenon of internal migration and the growth of new productive societies in remote areas. There is also flexibility in production and the ability to provide products according to the needs and consumer demand. The handicrafts sector also plays a positive and influential role in tourism development, as tourists are keen to acquire the products of those crafts.

In 2019, the Egyptian Environment Ministry launched the ECO EGYPT Experiences, a campaign to promote natural rediscovery and boost the importance of ecological conservation to mitigate the effects of climate change.

Such nature-based solutions safeguard the rights of communities. They are in line with what Inger Andersen, Executive Director of UNEP said during the 5th United Nations Environment Assembly (UNEA) in March. She stated: “Having a universally agreed definition of nature-based solutions is important. When countries and companies claim that their actions are supporting nature-based solutions, we can now begin to assess whether this is accurate and what it entails. This is especially true given the just-released report by the Intergovernmental Panel on Climate Change on the need to scale-up adaptation, for which nature-based solutions will be crucial.”

‏Egypt, which will hostCOP 27  in Sharm El-Sheikh, has committed to serious sustainable development measures to mitigate the effects of climate change while considering women’s empowerment like raising their awareness of local initiatives and training them to engage in eco-friendly industries.

Do you want to republish this article? Kindly contact janet@africanwomeninmedia.com