Handing over of Covid-19 gifts at the Yaounde metropolitan archdiocese

The Minister of Territorial Administration, Paul Atanga Nji has handed over President Paul Biya’s gifts of prevention kits to the Catholic, Protestant and Muslim communities established in Yaounde.

The gesture from the Head of State is prove that Paul Biya is aware of the challenges faced in the implemention of the Coronavirus response plan set up by the government, especially access to basic prevention kits.

Close to 3.000 cartons of savon, over 30.000 face masks, thousands of wash hand buckets and hand sanitizers including laundry buckets were distributed Wednesday June 17, 2020. 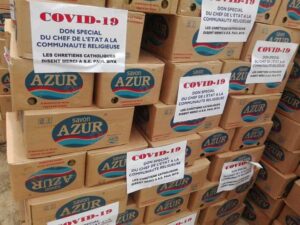 The first stop of the caravan was at the metropolitan archdiocese in Yaounde.

Paul Atanga Nji, after a brief prayer from archbishop Jean Mbarga, praised the religious community in general and the Catholic church in particular for respecting the Covid-19 response plan so far.

“President Paul Biya is very happy with the efforts of the church in fighting back Coronavirus and has sent me to provide these materials in a bid to consolidate the collective response from the church” says Minister Atanga Nji.

The Muslim community for their particularity received additional materials such as ‘prayer carpets’.

The different religious leaders who received the special presidential gifts did not hide their feelings.

Archbishop Jean Mbarga of the metropolitan archdiocese in Yaounde was overwhelmed with the prevention kits and said they were timely.

He promised to dispatch the materials across the archdiocese so it gets to all faithful.

According to the MINAT boss, the Head of State will not rest until covid-19 is contained.

The present gesture is a renewed invitation for the various religious communities established in Yaounde to maintain a united front against the pandemic in the country.