Green Development Advocate says there are illegalities in the process to degazette and for the concession of the forest to an agro-industry in Campo and Nyete, South Region of Cameroon.

According to the program coordinator of Green Development Advocate (GDA), Aristide CHACGOM, for a forest to be degazetted from the permanent forest estate, two conditions must be met;

– The site must be declared to be of public utility,
– An Environmental Impact Assessment (EIA) must be completed.

Speaking at a press conference in Yaounde Wednesday August 12, 2020, the scribe of GDA regrets the fact that the decree degazetting the 60.000 Hectares of forest plot was signed in 2019, months before an order was published declaring the project to be in public interest.

To make things worse, a company, CAMVERT has started work already on the land, without waiting for the decision to cede the land to them as required by the law.

The law according to Aristide CHACGOM stipulates that for a forest plot of more than 50 hectares to be degazetted, it requires a presidential decree to grant provisionary concession to the said company.

That has not yet be done, but the Minister of State Property, Surveys and Land Tenure, Henry Eyebe Ayissi has already ordered (on April 9, 2020) the Senior Divisional Officer for Ocean Division to authorize the exploitation of part of the said 60.000 hectares supposedly granted by the state.

Cry of the Population

GDA sticks to the fact that, the conversion of the forest plot (FMU 09 025) massif for oil palm monoculture production, undermines both the needs of the riparian stakeholders (communities) for Non Timber Forest products (Food, Medical and Aesthetic) and agricultural land, thus compromising their way of life and destroying the socio-ecological balance of the area.

Mr Ekane Nkwelle, Project Officer at GDA told the press that the population of the two localities, Campo and Nyete, greatly affected by the process are totally ignorant of what is going on in their area.

Even the chiefs of the concerned villages are not implicated in the process as stipulated by the law.

“The ongoing degazetion process reveals anomalies like it hinders the collective rights of the local (Bantu) and indigenous (Bagyeli) populations around the forest” he noted.

Article 9 (3) of the forest regime provides that:

“Degazettement may not take place when the clearing is likely to undermine the satisfaction of the needs of the local populations for forest products, and compromise the survival of the riparian populations whose way of life is linked to the forest concerned including the ecological balance of the area”

The Respect of Cameroon’s International Commitments

Green Development Advocate is categoric that the various actions taken within the framework of the conversion of 60.000 hectares of forest land in FMU 09 025 for oil palm monoculture production are very contrary to Cameroon’s International Commitments.

It goes against the commitment made through the ratification of the Paris Agreement on Climate Change in 2015 and consequently in its National Determined Contribution (NDC) to reduce it’s green gas emissions by 32% by 2034 compared to the year 2010.

With regards to biodiversity, GDA says Cameroon is a party to the United Nations Framework Convention on Biodiversity, and thus has the obligations regarding the promotion and protection of the rights of local communities and indigenous peoples in relation to the management of genetic resources. 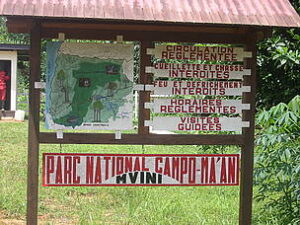 The organization notes that the Campo-Ma’an National Park is being threatened by the conversion of 60.000 hectares of its buffer zone.

According to Green Development Advocate, the populations of the affected villages are ready to mobilize for their rights.

The organization is equally ready to provide technical assistance in view of initiating legal processes on behalf of the concerned populations.

Teenager Kills Nephew Over Clashes With Sister in South Region

Teenager Kills Nephew Over Clashes With Sister in South Region