Women for a Ceasefire Deal (Image:VOA)

Sisiku Julius Ayuk Tabe and Co don’t have the right, they don’t have the mandate to discuss the future of Ambazonia while the remain in chains – Interim Government (IG)

Friday, July 3 2020, Information circulated on social media that the Nera 10 detainees at the Yaounde Central Prison in Kondengui have engaged in a pre dialogue with officials of the Republic of Cameroon.

The information was corroborated by the Head of the communication unit of the legal team of the Anglophone leaders, Barrister Amungwa Nicodemus Esq.

Though an official document is yet to provide details of the discussions, information has filtered out indicating that immediate focus was on a possible Ceasefire Deal between the warring parties of the struggle.

This, in response to the call from the United Nations for a Ceasefire in view of arresting Coronavirus.

Online News outlets quoted Sisiku Julius Ayuk Tabe to have revealed that the Ceasefire Deal does not mean an end to the struggle.

To Barrister Amungwa Nicodemus Esq, the Ceasefire is just temporal, but negotiations for the way out of the struggle will continue on a neutral ground and with a neutral negotiator.

South Africa is alleged to have accepted to play host to such a dialogue.

The People’s Action Party of Njang Denis Tabe has supported the dialogue initiative but stressed it should hold on open sphere, should not be limited to those in jail and every resolution should be documented and signed. 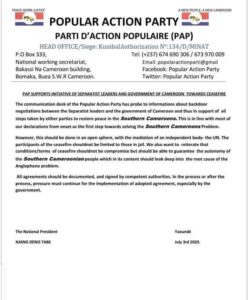 The news of a possible Ceasefire in the NW and SW regions was received with satisfaction by Cameroonians contacted by News Upfront in Yaounde.

“At least we can have the opportunity to go home, feel our land, and resume our normal daily activities without fear of the unknown” Fon Emmanuel told News Upfront.

Others saw it as a perfect opportunity for the implementation of the Presidential Plan for the Reconstruction and Development of the Anglophone regions.

Their happiness was short-lived as hopes for a new dawn were dashed out hours later following a counter reaction and disclaimer from the Interim Government of the Ambazonia.

A release signed by the Secretary for Communication & IT of the Interim Government, Chris Anu indicates that the move from Sisiku Julius Ayuk Tabe and Co is their private initiative since they don’t have the mandate to speak or negotiate on behalf of the people of Ambazonia. 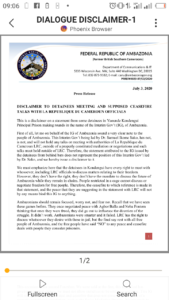 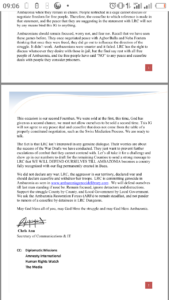 “People restricted in a cage cannot discuss or negotiate freedom for the free… The people of Ambazonia have said NO to any peace and ceasefire deal with the people they consider as prisoners” Chris Anu wrote.

The Interim Government (IG) sees the move from Sisiku Julius Ayuk Tabe and Co as another scam, indicating that a similar negotiation was done with Barrister Agbor Balla and Neba Fontem for their liberation but with a secret mission to foil the struggle.

The President of the outlawed Anglophone consortium, Barrister Agbor Balla is yet to react to the statement but has however saluted the initiative for a Ceasefire Deal from Sisiku.

The IG in their disclaimer of the announced ceasefire deal noted that they are ready for a total Dialogue for the way out of the crisis with Cameroon on a neutral ground and with an independent negotiator.

According to them, Cameroon should declare Ceasefire because they declared war and should withdraw it’s troops from the troubled regions

Any other avenue will be an obstacle to resolve the close to four (4) years old Anglophones Crisis, they noted.