The reappearance of Cameroon’s President, Paul Biya is yet to be digested fully by some Cameroonians who insist that the Head of State has died.

After close to 40 days of non-public appearance, President Paul shocked his critics and received the French Ambassador to Cameroon, Christophe Guilhou at the Unity Palace.

Many of his critics have continued to express their disbelief after it was posted on his social media handles saying they were manipulated images. 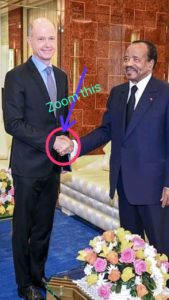 “Why is the rope on the French Ambassador not twisting his ears? Why is Pa Paul not wearing a face mask?” a critic said.

“Something of this sort was posted on the 5th of March with same suits” another said on a social media platform.

Other have maintained their disbelief even after viewing the news on state television, questioning his posture. “Why is Pa not facing the ambassador? Or e be di vex? So many why” said another critic.

President Biya’s long silence during this Coronavirus pandemic, had given room for political opponents to believe rumours of his demise.

Popular Action Party, PAP President Njang Denis had announced his plan to seize the constitutional Council to ascertain the veracity of the information of Biya’s death.

Runner-up in last Presidential election, Maurice Kamto also gave a one week ultimatum to Biya to show proof of life.
Same day the MRC leader wrote to the National Assembly and the Constitutional Council to declare Cameroon’s Presidency vacant, Biya resurfaced in what has been termed the “Power of Silence.”

Since President Biya’s reappearance yesterday afternoon, analysis and debates between pro and anti-Biya supporters have abound both mainstream media and social media platforms.

“Kamto knows where to prick him (Biya) so that he feels the pains. See how the last outing of President Elu has forced the slumbering lion out of its den, possibly with French instructions.
Who says, the illusionary would-have -elected president is not playing his cards well?” said an anti-regime supporter.

“Happy to see you in good shape Mr President. I admire your serenity” a commenter replied to Biya’s tweet.