Yaounde, CAMEROON – It was only this year that the government disclosed the death of Samuel Ajiekah Abuwe aka Samuel Wazizi, a journalist with Chillen Muzik Television in Buea. He is reported to have died on August 17, 2019 in military custody.

For ten months, the government maintained sealed lips despite demands from the media, family members, colleagues, lawyers and advocacy groups. Samuel Wazizi was arbitrarily arrested and detained in an undisclosed military installation from August 2, 2019.

A statement issued by the spokesman of the Ministry of Defense, Colonel Cyrille Serge Atonfack claims that Wazizi died of severe sepsis. An independent investigation into his death has since not been carried out.

The Wazizi impunity case is one of many for journalists in Cameroon, especially those living in the troubled regions of the North West and South West and covering the Anglophone Crisis which is stretching into its fourth year.

The belligerent sides have been unleashing untold terror on journalists. Media workers are also arbitrarily arrested and detained or abducted, as well as tortured in detention facilities.

The safety of journalists in Cameroon is at risk. Journalists covering the September 22 protests of the opposition in Douala, Yaounde and Bafoussam were brutalized, arbitrarily detained and their equipment reportedly vandalized by security operatives. No perpetrator has so far been held accountable. 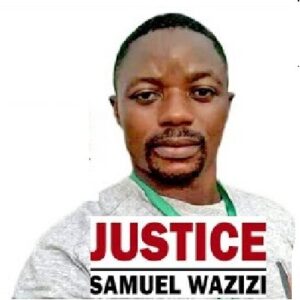 Such attacks on the press undermine Cameroon’s opportunity to grow its fragile democracy. When journalists are not safe, reporting meaningful stories is shelved and citizens do not have the information to make evidence-based decisions.

Attacks on journalists work towards covering up the truth. This creates a breathing ground for misinformation, abuse of power and public mistrust.
On the International Day to End Impunity for Crimes Against Journalists, I call on Cameroon authorities to immediately order an independent probe into Samuel Wazizi’s death and let justice take its course.

Government should also investigate other targeted attacks against journalists and ensure that such do not happen again. Conflicting parties in the North West and South West Regions must refrain from crimes against media workers.

Journalists, as you uphold the fundamental right of the citizens to be informed and to know the truth, do so without fear or favour.