Cervical cancer is the only cancer with known causes and which can be treated at 100 percent if captured early enough. The World Health Organization (WHO) has established a strategy to eliminate the cancer worldwide. Cameroon has embrace the strategy.

The last words from her mother on her dying bed were “my dauugther, though you are very healthy, always remember to go and do your tests in order not to suffer like me in life”.

Eveline’s mother died of cervical cancer, and by then she had never heard of, or seen someone suffering from it.

“I thought my mum had been bewitched,” Eveline said.

“When I noticed that my mother died of cervical cancer, I was curious to know more about the disease, that is how I learned she died of something that was preventable and could be treated it captured early.”

Today Eveline is a civil society activists, Executive Secretary of an organization, Humanity at Heart International based in Buea, South West region of Cameroon. She joined the fight against cervical cancer to prevent people from suffering from what her mother went through.

“So I decided to do advocacy, to make sure that everyone becomes fully engaged, in creating awareness, in making sure that women get screened early enough,” she said.

These statistics are disturbing and frightening but the good news is that cervical cancer is curable.

“Cervical cancer is the only cancer that can be treated at 100 percent if captured early,” says Madam Tata Eveline Mayaah, Executive Director of Humanity at Heart International.

The organization in collaboration with the women health program of the CBC Health Services, and the National Committee for the fight against cancer in Cameroon recently organised a cancer elimination workshop in Yaounde. 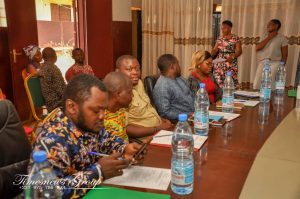 The workshop that held on Friday, January 13, 2023 at the National Committee for the fight against cancer brought together over 20 journalists from the Yaounde Chapter of the Cameroon Association of English Speaking Journalists (CAMASEJ).

“Most of us learned new things today about cervical cancer, and it is going to help us in the various stories that we would tell,” Ndi Eugene Ndi, CAMASEJ Yaounde Chapter president said.

The objective of the workshop was actually to enjoin the media men and women to take the news to the public, especially that fact that cervical cancer can be treated at 100 percent if captured early enough.

For the first time in the history of mankind, the World Health Organization (WHO) has come up with strategies that can be used to eliminate a cancer.

In May 2018, the WHO Director-General announced a global call for action to eliminate cervical cancer, underscoring renewed political will to make elimination a reality and calling for all stakeholders to unite behind this common goal.

Now is the time to act to eliminate cervical cancer as a public health problem.

“Through screening and vaccination, we can eliminate cervical cancer,” says Manjuh Florence from the women health program of the CBC Health Services.

She was one of the experts at the cervical cancer elimination workshop in Yaounde. Manjuh Florence added that “cervical cancer is a real threat to the lives of women in Cameroon”.

“However, the good news is that cervical cancer is the only cancer with known causes,” she said.

Long-lasting infection with certain types of human papillomavirus (HPV) is the main cause of cervical cancer. HPV is a common virus that is passed from one person to another during sex or even body contacts with the laps. At least half of sexually active people will have HPV at some point in their lives, but few women will get cervical cancer.

Smoking and being chronically immunocompromised can increase your risk of developing cervical cancer. Also, not having routine cervical cancer screening tests (Pap tests) can mean pre-cancers are not found in time to prevent cancer.

Another very important risk factor is male uncircumcision. Uncircumcised men are are high risk or contracting and spreading cervical cancer.

“This is because the top-end layer of their penis that has not been cut off through circumcision serves as a good reservoir for the HPV virus,” Manjuh Florence told News Upfront.

“Cancer is easy to detect in youths than adults, but easy to threat in adults than youths,” Dr. Manjuh Florence declared to journalists during the workshop as she encouraged all and sundry to embrace early screenings.

Cervical cancer develops very slowly. It can take years or even decades for the abnormal changes in the cervix to become invasive cancer cells. Cervical cancer might develop faster in people with weaker immune systems.

“After 24 months, the virus becomes persistent and that is where the problem starts,” Manjuh said.

Cancer is thus preventable during the pre-cancer period of less than 24 months, from infection day (latency period). 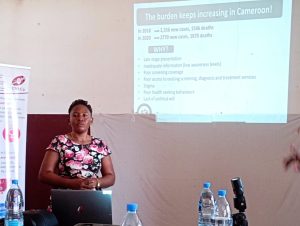 One of the reasons for the high rate of cervical cancer in Cameroon is ignorance. Many people are not even aware that it exists. The few that are aware cannot benefit from treatment because of poverty. The government has however come up with options of vaccination which is free, and other organizations in the country like the CBC Health Services are providing free screenings.

To eliminate cervical cancer, all countries must reach and maintain an incidence rate of below four per 100 000 women. Achieving that goal rests on three key pillars and their corresponding targets.

– Vaccination: 90% of girls fully vaccinated with the HPV vaccine by the age of 15;

The cervical cancer elimination workshop was organised within the framework of an advocacy to respecting these targets.

The best treatment for cervical cancer is prevention.

The different health experts revealed that children are vaccinated from the age of 9 years. Vaccination is free at the age of 9 to both boys and girls.

Vaccination protects the spread and transformation of the HPV virus in humans, reducing the effects to zero, and thus contributes to eliminating the cancer from the body.

If vaccination is duly respected, and by all, the chances of eliminating cervical cancer would be greatly increased, the health experts disclosed during the workshop.

“Each country should meet the 90-70-90 targets by 2030 to get on the path to eliminate cervical cancer,” says Tata Eveline Mayaah, Executive Director of Humanity at Heart International.

The basic challenges in Cameroon are ignorance and poverty.

The government of Cameroon is struggling to raise awareness on cervical cancer.

Sensitization is vital, and the national committee is yet to cover the entire national territory.

“Civil society organizations can assist the government especially in the hinterlands, but finances is another challenge, coupled with difficult access,” Madam Tata Eveline told reporters.

The cost of cancer treatment in Cameroon is also very high. The government is actually subsidizing the treatment but yet much still need to be done.

The cost will really not be a problem if the 90/70/90 target, set by the World Health Organization (WHO) is respected, because it will go a long way to fully eliminate the cancer in the world.

Chronicling Gains On Path To Peace In NW, SW

“Information Can Save Lives”: Story of Young Cameroonian who came Close to Monkeypox