The GATES Project: Cameroon to Reduce 30% Tobacco Consumption by 2025

Officials from the Ministry of Public Health, WHO and CSOs at the launch of the GATES Project in Yaounde

Cameroon has reiterated it’s objective to reduce 30% of tobacco consumption in the country by 2025.

The commitment was reignited by the Permanent Secretary of the National Drug Control Committee in Cameroon.

Dr. Yaba D. was speaking at the launch of the fourth phase of the World Health Organization (WHO) GATES Project, Wednesday December 8, 2021 at the Djeuga Palace Hotel in Yaounde.

“Cameroon has done a lot in the fight against tobacco but much still need to be done. It is eminent that we vote and promulgate the draft bill on the fight against tobacco consumption. It is equally eminent for the president of the Republic of Cameroon to ratify the protocol to eliminate illicit trade on drugs and related products. These would help in the anti tobacco campaign.” Says Dr. Yaba.

The disease prevention and control officer of the World Health Organization office in Cameroon, Dr. DOUBA EPÉE Emmanuel, who presented the GATES Project said, special attention would be on support efforts geared towards tax reforms on tobacco products, in order to reduce demand from consumers.

“The main objective is to reduce and decrease tobacco consumption by increasing taxes on highly consumed tobacco products. To do this, the project will help coordinate and regulate tax reforms, illicit trade on drugs, manoeuvres from tobacco production companies among others.” Dr. DOUBA EPÉE told News Upfront.

The WHO GATES Project will run till 2024 and the World Health Organisation would help assist Cameroon technically to become more independent in the fight against tobacco.

“There is an observation that the countries of the world, in this case African countries, are making efforts in the fight against tobacco. But we realize that these efforts are not sufficient to stop the damage caused by smoking. The other observation is the application or implementation of the WHO Framework Convention on Tobacco Control. We realize that most African countries and the world have already ratified this convention, but in the implementation, there are still many shortcomings. This means that the fight against tobacco has not yet reached the optimal level. And now, with Covid-19, we know that the diseases or health problems related to smoking and especially lung problems, heart problems, we have chronic respiratory failure, we have diabetes and all these diseases or health problems are the seal for serious cases of Covid-19. So we understand that there is an urgency to be able to intensify tobacco control.” Says Dr. DOUBA.

According to recent statistics from the World Health Organization (WHO), 71% of deaths in the world are related to tobacco complications. It is a major cause of premature deaths with about 8 million children dying annually.

In Cameroon the situation is not different. 37% of Cameroonians are passive smokers. 66.000 people die yearly from tobacco related complications. Children less than 15 years old are 15.2% concerned, with the highest rate within the school millieu.

Given the epidemic rates of youth tobacco use, especially for e-cigarettes, governments and local tax-writing authorities should set taxes on all tobacco products, including e-cigarettes, at levels high enough to discourage non-users, particularly youth, from using them.

Cameroon has actually engaged in discouraging smokers with graphic images on cigarette packs, though the measure is yet to yield fruits. 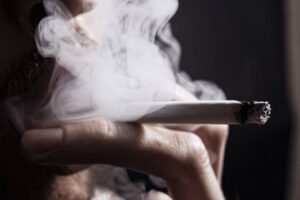 A tax structure that uses a sliding scale based on product health impacts can discourage use of the most harmful products. For those who cannot or will not quit tobacco altogether, a comparatively lower tax rate makes those products that help smokers switch completely to significantly less harmful products more accessible, and increases incentives to quit the more expensive, and most harmful combustible products.

Experts hold it that increase in the increase in taxes on cigarette and other tobacco products is a comprehensive measure for tobacco control.

‘A Heavy Stab On The Back’: Cameroon Dumps West,  Inks Strategic Military Deal With Russia