The 6th Berlin Science Week kicks off in Berlin – Germany

The occasion provides for more than 200 events, including the voices of global scientists and science-driven industries. This platform shed insights into trending topics in science and endures to discuss grand challenges and envisions the future of scientific expansion.

An opening press conference held on 20th October 2021 brought together the Governing Mayor of Berlin and the Social Science Research Center Berlin (WZB). The experts highlight the essence of the conference and the evolving role of science.

Toby Wardman, the Head of Communications at the Science Advice for Policy by European Academies (SAPEA), recount their mandate.

“So the first mandate to give science advice, the second mandate to communicate with the world about that, or at least with European citizens.” He said.

SAPEA is part of the European Commissions scientific advice mechanism. 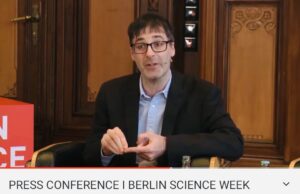 According to Toby, the Falling Wall Science colloquium is essential for showcasing science work. The idea of science engagements seemed farfetched in 2015, he states. The inclusion of journalism in these gatherings supports the development of science communication.

“… if we want to be able to address the scientific issues that are facing society now, we need to have citizens involved in debating and understanding, contributing to those discussions.”

Berlin inspires – Sciencntists regard Berlin as a centre for innovation, a start-up hub, a place for science evolution to thrive and the sprouting of innovative ideas for the future. Berlin enables the exploration of new trends, an attractive spot for novel inventions to prosper.

The Science Week will enable experts to debate and exchange experience in an open spirit. The event supports networking, which is a gismo that aids innovation and professionalism.
The Felling Wall conference exhibits scientific facts and discoveries, exploiting the opportunity to stimulate collaboration amongst experts, the selected Berlin scientific institutions and the journalists in an integrated spirit in supporting science communication.

The Berlin young scientists at Urania presented their work on 30th October 2021 at the “Tabula Rasa” science fair. Following on Sunday, 31st October, “Cosmic Kiss” live – the launch of ESA astronaut Matthias Maurer and his crew to the International Space Station ISS.

The Programme of activities indicates that from 5–6 November, the events will hold at the “Berlin Science Week Campus” and from 7 – 9 November at the “Falling Walls Science Summit” in Berlin.

About The ICT University