by Louvier Kindo Tombe
in News
1

Three people are reported dead and six others responding to treatment following the collapsed of a storey building in central town Foumban.

The population of Malatam quarter in Foumban are yet to come to terms with the tragic incident of Saturday March 28, 2020.

Reports indicate that an uncompleted two storey building suddenly collapsed on technicians who were at the construction site working.

Among the victims that were caught up in the rubbles was a-two-month-old baby who miraculously survived the shock.

She was saved by the population that immediately launched a rescue operation after the building went down.

Three other people were also saved and immediately rushed to the “Palais” hospital for treatment, meanwhile three of the victims could not resist the shock and are at the mortuary of the said hospital.

The exact cause of the Malatam building collapse is still to be duly established but sources are attributing the accident to poor construction materials and non respect of building terms.

However, an investigation has been opened to that effect, after security officers and administrative authorities visited the site of the incident.

Foumban, is the capital of the Noun Division in the West Region of Cameroon, and doesn’t yet have a unit of the fire fighters brigade. 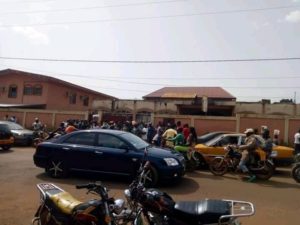 The population of the affected locality believe that with the presence of a fire fighting unit in the area, accidents of this nature would not lead to severe casualties like what has been registered with the Malatam building collapsed.

COVID-19 and Journalism: Tips for responsible reporting in a challenging context.