The four MTN subscribers who won a villa each in Yaounde appreciated the commitment of MTN Cameroon during a visit to the construction site. 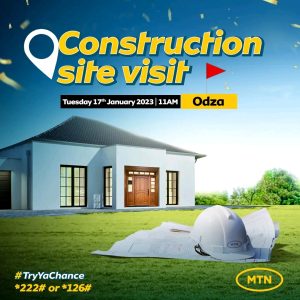 When Divine Fobeng paid his bills through MTN mobile money transaction, it was to safe time and stress, little did he know that luck was about to fall on him.

“I first received a message from MTN that am on the list to win a house, then after two days I received another message that I am a winner,” Mr Fobeng said.

Most, if not all the winners of the MTN Chance Promotion were taken by surprise.

“MTN called me barely two days after I carried out my mobile transaction, and to me it was a great surprise,” Mohamadou Diaouro, another winner from Ngaoundal (Adamawa Region) recounted.

Some were sceptical at the beginning, but now trust the promotion.

“When I received the call from MTN that I am a winner in Yaounde, I only confirmed after visiting their facebook page,” says Madeleine Mireille Sonia Essamba.

32 years old Sonia Essamba, is the lone lady among the four lucky winners. She is preparing for her wedding in the days ahead and her wish is to park into her new villa immediately.

“I am amazed with what I see here, MTN Cameroon is doing a wonderful job in helping Cameroonians to become landlords and house owners through this promotion,” she said.

During the field visit to the construction site organized by MTN Cameroon on January 17, 2023, the head of the construction company revealed that the houses (Modern Villas) will be ready in a no distant future.

“I was informed that I am a winner just two days ago and today I am here Infront of my future house under construction,” Mohamadou Diaouro told News Upfront.

“I will be glad to relocate from Ngaoundal to the country’s political capital, Yaounde.”

Upon completion, the modern villas would comprise each of a kitchen, a dining section, a seating room, 2 bedrooms, two toilets and a parking space.

They are being constructed in the Odza residential quarter with class and standards and security is a priority to MTN. 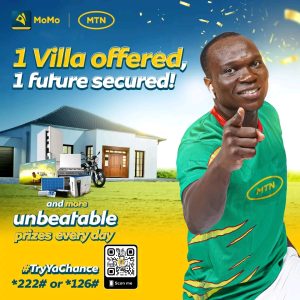 The MTN Chance Promotion was launched since November 16, 2022 and it will end on February 14, 2023. The objective is to satisfy MTN subscribers for their commitment to its services. 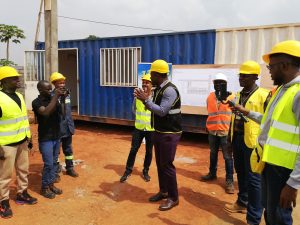 So far eight (8) house have been won by MTN subscribers. Four in Douala, and four in Yaounde. Six (6) modern villas are still available and open for all MTN subscribers to win. The procedure is very simple.

“To become a winner, you can either purchase any MTN bundle of FCFA 250, or effect a mobile money transaction of at least FCFA 5.000,” Mr. Thierry Stephane Dzia Damou said.

“Those who are still doubting, you can grab your chance now and subscribe on MTN, you can become a villa owner next week,” says Divine Fobeng.

Besides the modern villas, MTN Cameroon through ‘MTN Chance’ is offering many other prizes to its subscribers.

“You can win a villa every week, and unbeatable prizes and bonuses everyday for your MTN transactions,” Mr Thierry Stephane Dzia Damou disclosed.

MTN Cameroon will not stop at daily and weekly prizes. The Mobile Telephone Network is planning something big for all its subscribers.

“At the end of the first phase, there is going to be a final big prize for all those who participated in this promotion. They will stand the chance of winning an equipped and connected house,” Thierry Stephane revealed. 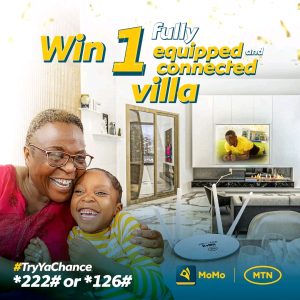 “The house will be equipped with a smart TV sets, a dining set, a fridge, and many other house appliances including an MTN home internet modem with two years free connection.”

According to MTN Cameroon officials, this is a way of giving back to their subscribers. The days ahead are thus fruitful and everyone stand the chance to become a winner.

“Try your chance, dial *222# or *126# immediately, and be guided. Before you know it, you will become one of the remaining six (6) lucky winners of the MTN Chance Promotion.