Demonstration of Grief: NW Queen Mothers Against Violence and Killings in Anglophone Crisis

by Ingrid Kengne
in News
0

Queen mothers of the North West region of Cameroon have again staged a public demonstration in Bamenda to express their grief over the consistent violence and killings of their children as well as traditional leaders of the two English speaking regions.

Wednesday February 24, 2021 was another opportunity for the Mafors to express their discontentment over the killings in the anglophone regions.

The recent being the brutal killings of three Traditional chiefs in Essoh-Atah, Lebialem Division in the night breaking February 12, 2021.

Not leaving out an 87 Year Old grandmother in Nwa who was slaughtered among many others in the month of February alone.

Coming from across the region, they converged on the Bamenda Grand Stand, mourned and deplored the attrocities in the regions, calling on the belligerents in their local languages to abstain from such acts.

At the head of the initiative is Camtel’s General Manager, Judith Yah Sunday Epouse Achidi, who is multiplying avenues for peace to reign in the troubled regions.

“… I cannot be happy while my sisters, mothers, from the NW and SW Regions are suffering. Children are killed day and night. I cannot sit in Yaounde comfortably when blood is being shed. My sisters cannot go to the farms. They cannot go to the markets to do business. They cannot send their children to school.” These are the words of Camtel’s GM, echoed by Ndinwa Benedict, as the GM was unavoidably absent.

According to the queen mothers, the ongoing crisis is only taking the region backwards.

The gathering of the queen mothers to raise awareness and speak against the attrocities of the anglophone crisis started some months back and has become a tradition.

It has helped in sensitizing the warring parties to the conflict, Camtel’s Head of Communication and Public Relation, Ndinwa Benedict, told News Upfront.

“… About the impact the fruits of the Initiative, we cannot measure. The boys leaving the bushes day and night to join the DdR Centres in Bamenda and Buea” Ndinwa said. 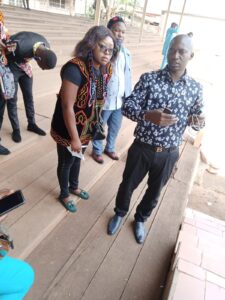 The promoter of the initiative, Mafor Judith Yah Sunday Epse Achidi, General Manager of Camtel was praised by her peers for her relentless efforts towards the well-being of the people of the North West and South West regions.

They called on God almighty to always stand by her in all her endeavors.

Like has always been the case in the previous events, Sunday’s gathering ended with a peaceful March on the commercial avenue with the women brandishing placards with messages specially crafted for the context.

Judith Yah Sunday Epse Achidi takes credit for not only organising the mourning sessions but also for using it to reach out to the seperatist fighters in the bushes and in the DDR Centres.

She has been visiting the DDR Centre and handing over cash and foodstuff to the ex-combatants.

To those still in the bushes, she has not stopped at anything to call them to order.

The Mafors have vowed to carry on with the initiative until peace return to the restive North West and South West regions of Cameroon.