The Northwest region of Cameroon has registered it first case of the Covid-19 pandemic.

According to a release signed on Monday April 20 by the region’s Governor, Adolf Lele L’Afrique the concerned individual originates from the region but residing in Douala, Littoral region.

“He arrived Bamenda on the 15 of April 2020 in his private car, after going through the medical screening at Matazem/Santa, where he voluntarily express the wish to have a confirmatory test of Covid-19 conducted on him” the release stipulated. 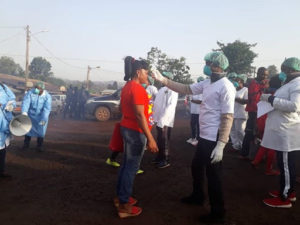 The main testing centre, Yaounde Centre Pasteur confirmed his contraction of the virus days after his sample collection was forwarded to the centre for analysis.

The case is now being managed by health authorities after he had opted for self-confinement at home pending the results.

Northwest region marks the 9th out of 10 regions in Cameroon to record the insidious virus with the exception of Far North region.

On April 19, the Adamawa and North regions registered their first cases of the pandemic just after the East, South, Southwest, West, Littoral and Centre regions were infected.

A fortnight ago, the Northwest regional authorities backtracked on a reported first case, saying they were deceived.

While calling for calm amongst the population, the Governor urged them to strictly respect the hygiene measures of frequent handwashing, covering of mouth and nose when coughing and sneezing as well as social distancing.