by Ingrid Kengne
in News
0

Government officials on a mission to the West region

Transport Minister, Jean Ernest Massena Ngale Bibehe, has said that special measures are being put in place to ensure the fast recovery of the survivors of the Dschang Cliff accident, while Housing Minister, Celestine Ketcha Courtes, joins in purifying the highway.

The Minister of Transport was speaking in Bafoussam on January 31 during a special visit to victims of the Dschang Cliff accident recommended by the Head of State Paul Biya.

Doctors in charge of these patients have confirmed that they are positively responding to treatment.

The Minister later on visited the accident site before chairing a meeting at the Menoua SDO’s office, where an assessment of the accident was made.

Measures to curb the rate of road accidents were proposed by transport bodies like the road transport union, civil societies, promoters of transport agencies among others. 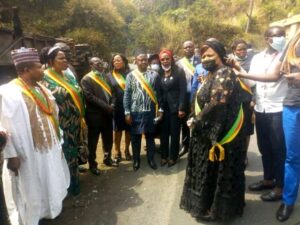 The Minister on his part, vowed to buy Ultra Modern radar guns, intensify sensibilization campaigns and workshops particularly for stakeholders of the transport sector.

The Minister of Housing and Urban Development, Célestine Ketcha Courtes, also paid a condolence visit to the Victims of the accident, where she extended a comfort message from the Presidential Couple to the victims.

“I came to pay attention, affection and to encourage our brothers and sisters at the hospital due to this terrible accident”, said Célestine Ketcha Courtes. 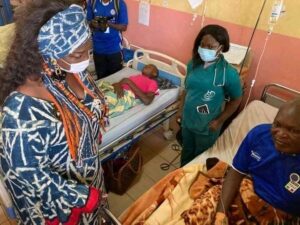 She later on drove to the accident scene, alongside the West Regional Governor where they joined some Traditional Rulers to perform some rites.

To the Minister, these rites are very crucial.

“when there is fire in the house, my Bantou tradition says we should use water to stop the fire. This is to say no to such an accident in our family again”, indicated the Minister as she also sprinkled water on the site.

Governor Awa Fonka Augustine reported that one more body was found at the scene of the accident.