Sons and daughters of Lebialem division in the restive South West region have unanimously resolved to revived the socioeconomic life of the division and make it great again as was the case before the start of the ongoing crisis in the two English-speaking regions of the country.

The firm commitment was taken during the Lebialem Socioeconomic Conference which held in Buea Saturday August 13, 2022. The confab under the patronage of the Minister Delegate to the Minister of Economy Planning and Regional Development, MINEPAT, Paul Tasong, rallied delegates from the three subdivisions of the division viz Alou, Wabane and Menji and those resident out of the division.

It unfolded under the watchful eyes of the Secretary General at the South West Governor’s Office, Nkweti Gilbert, who, sat in the Governor. The confab aimed at reviewing the state of the crisis in Lebialem and to take decisions that would ensure speedy return to normalcy.

In his keynote address at the opening, Minister Tasong, urged participants to be frank, truthful and make contributions that would see the division rise against its present challenges and be great again. 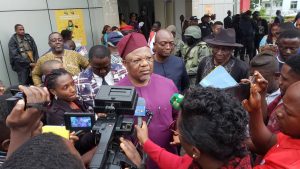 “Today is the beginning of solidarity and mobilisation drive in Lebialem. We must stand up and say no; we can turn the situation around within a very short time,” Tasong said. He regretted the damage the ongoing armed conflict in the division has caused to the hitherto peace-loving, development-oriented and hardworking population.

He further lamented: “The situation of social live in our division has degraded beyond the time when our division was created. This is unacceptable. Our division has been and I should say continues to be in the news for the bad reasons. We want to put an end to that rhetoric”.

Tasong said the elite and population are bent on reversing the trends by which the division is considered a black spot in the country. “To that narrative by which Lebialem is considered as the black spot in the map of Cameroon particularly our division headquarters. Ours is the only divisional headquarters out of 58 in this country which is a total ghost town,” he regretted, but reaffirmed things will not be the same in the division again.

“We have decided today to put an end to that. We are going to go to Menji to clean up the city, chase the rodents and go back and make our capital city lively, a habitant worth human lives once more”, Tasong said.

Marveled by the frankness of the discussion and massive turnout at the confab, Tasong declared: “I feel like I am a Minister today”. He harped on the urgent need for Lebialem sons and daughters to change the narrative of the situation on the ground and by playing their role to ensure return to peace in all communities in Lebialem.

He highlighted the need for community labour in order to keep all communities in general clean and the divisional headquarters, Menji in particular clean and ready for the start of the new academic year with three million FCFA raised by elite to support the cleaning of Menji. He noted that all and sundry and determined to see the implementation of all the resolutions with the mayors of Lebialem to come up with a plan of action to see it concretise at the local level.

Enter Lebialem traditional rulers
Traditional rulers of Lebialem division in an extra-ordinary meeting prior to the confab, also reviewed the situation of the crisis back home and resolved to contribute to return to normalcy. They pledged their unalloyed support to the actions of elite and the population as well as forces of law and order to see fast return to normalcy.

They appreciated all sons and daughters of the division both at home and abroad who have either dropped their weapons and embrace peace of dumped the Ambazonia conflict and cast spells on Chris Anu and those acting in like manners for the troubled caused in the division.

They also appealed to others still in the bushes to drop their weapons, join the Disarmament, Demobilization and Reintegration, DDR Centres and challenged all and sundry to contribute their own quota for return to peace.
They saluted the Head of State, Paul Biya, for appointing Lebialem sons including Fombele Mathias Tayem as SDO of Logone and Chari division and Nweti Gilbert as the Secretary General at the South West Governor’s Office.

They also hailed the appointment of a new SDO for Lebialem, Ambang Carl Fabian, and called on the population to rally behind the political leaders, administrative officers, religious authorities and civil society leaders to ensure effective resumption of schools and economic activities in the division.

The traditional custodians also invoked the ancestors of the land and God Almighty God to accompany the population and elite in executing all the peace initiatives aimed at re-establishing peace in Lebialem division. The initiative of Minister Tasong to gather Lebialem population to brainstorm on tackling challenges faced at in the division was lauded by all and sundry.

“Today is one very big day for us because our own leader, Minister Paul Tasong has called us here and the sons and daughters of Lebialem united around him and our Fons and we took stock,” said Nkemasong Nicasius, Mayor of Menji.
He added: “The elite have put their hands together and they have enabled the process of clearing Menji. So we are thinking that in the days ahead, we would band on the population that is already there and will work with community support to see how we can clean the town and make it look like a divisional headquarter”.

The initiative, it should be said, falls in line with recent prescriptions which given to elite of the two Anglophone regions to rally their population and brainstorm a way out of the crisis. The holding of the Lebialem confab comes after that which was held in Ndian for similar purposes.