Official distribution of gifts to IDPs in Yaounde by the Minister of Territorial Administration, Paul Atanga Nji

Some 1000 Internally Displaced Persons from the North West and South West regions of Cameroon residing in Yaounde have received a consignment of gifts from the Head of State Paul Biya.

The distribution of the consignment which is worth FCFA 600million was on December 21st in Yaounde.

The distribution was done by the Minister of Territorial Administration, Paul Atanga Nji.

While handing over the gifts to IDPs in Yaounde, the MinAT boss said;

“Today is the kick off in Yaounde, we have about 1000 persons who have benefited from it. After Yaounde, we are going to Bamenda, Buea, Douala and some other places for the same exercise.” 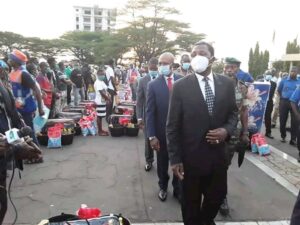 He described Biya as a benefactor to the nation.

“President Biya is the father of the nation, and he understands that despite the difficulties, Cameroonians can live where ever they are comfortably.”

Mr. Paul Atanga Nji added that president Biya has done this gesture more than 170 times, but this one is very special because it is coming at the end of the year.

To him, all the IDPs should remember that Biya thought of them at the end of the year. 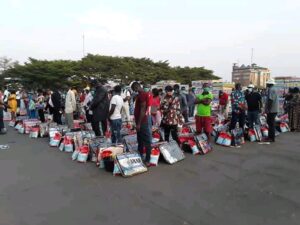 He also urged these IDPs to return to their regions because according to him, there are already returning caravans, so for those who want to return, they can register with the Directorate of Civil Protection.

It should be noted that the call comes when killings are still persisting in the restive North West and South West regions of Cameroon.